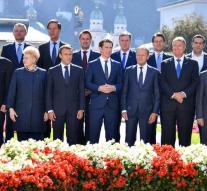 salzburg - The EU should focus on strengthening the external borders of the union and cooperation with countries outside the EU in order to keep the migration within bounds. That said EU President Donald Tusk after an EU summit in Salzburg. 'The migration debate shows that we do not agree on everything but on the goal: to curb illegal immigration. We have decided to focus on what unites us and has already produced results. '

The Austrian Chancellor Sebastian Kurz had invited the leaders for a special migration summit. Austria is temporarily EU president. A public clash about the lack of solidarity among the member states in picking up boat refugees, which are usually picked up by the Italians, was not forthcoming. Tusk had told the EU leaders in advance 'to stop each other from pointing each other's finger. '

The leaders agreed to organize a summit in February in Egypt with the Arab League, an organization of 22 Arab countries. Kurz and Tusk are in talks with President Abdul Fatah Al-Sisi on cooperation in the field of migration. There will be more such 'dialogues' with countries in the region.

The European Commission's proposal to expand the European Border and Coast Guard from 1300 to 10 000 men and to give a greater role in the return of migrants to their countries of origin was also discussed. According to Prime Minister Mark Rutte, that plan is 'not ripe for decision-making. 'Last week he called the proposal' a bit wild. '

The migration summit was dominated by tensions between London and the rest of the EU about the impending departure of the British from the EU.