Home / World / EU leaders in Salzburg for summit on migration 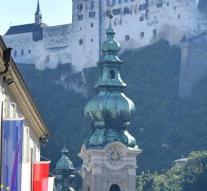 salzburg - The EU leaders are on Wednesday and Thursday in Salzburg for a migration summit. Host is Austrian Chancellor Sebastian Kurz, who wants to speed up the migration issue as a temporary EU president.

Heads of government and presidents begin Wednesday evening at 7:30 pm with a working dinner in the Felsenreitschule, the theater where the singing family Von Trapp, world famous by the film The Sound Of Music, performed. Prime Minister Mark Rutte is missing the dinner because he has to be in the House of Representatives. At the dessert, Prime Minister Theresa May has her say about the brexit. There is little time left to reach an agreement on the divorce and the future relationship. EU President Donald Tusk suggests that an extra summit be held in November.

Rutte is there on Thursday. From half past nine onwards, security within the EU is on the agenda in Mozarteum University, including the strengthening of the EU's external borders.

At lunchtime at 1 p.m., EU negotiator Michel Barnier talks to the leaders minus May about the Brexit negotiations. The summit ends with press conferences after 3 pm.