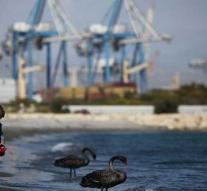 brussels - Turkey gets a firm blow on the fingers of the 28 EU leaders with 'a sharp condemnation' because of provocations in the territorial waters of Cyprus. At a summit in Brussels, the EU declares 'full solidarity with Cyprus and Greece', according to the draft conclusions.

Since February, Turkish naval vessels have been holding a ship from the Italian energy company ENI that wants to investigate gas finds in the sea near Cyprus. Last month, moreover, the Turkish coastguard would have rammed a Greek patrol boat that was partly paid by the EU.

The leaders call the actions of the Turkish navy in the Mediterranean and Aegean 'illegal' and call upon Ankara to stop it. Cyprus is justified in investigating its own waters and exploiting its natural resources, according to the EU.

In addition, the leaders have 'increasing concerns' about the continued detention of EU citizens in Turkey. They ask for a quick solution.

Relations between Cyprus, a member of the EU since 2004, and Turkey have been strained for decades. In 1974, Turkey occupied the northern part of the island. The Republic of Northern Cyprus is only recognized by Ankara. The summit calls on Turkey to normalize relations with all EU Member States including the Republic of Cyprus.