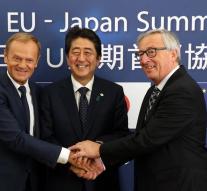 brussels - The European Union and Japan are ready to tighten sanctions against North Korea, following the recent missile test of the Stalinist regime in Pyongyang. Both major powers therefore support a resolution that the United States prepares in the UN Security Council.

The leaders call on the UN Security Council to adopt the resolution quickly. And Pyongyang must refrain from 'further provocations that raise regional and international tensions' and stop its nuclear and rocket programs.