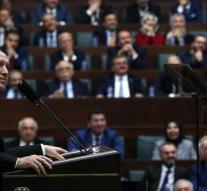 brussels - The European Union has invited Turkish President Erdogan to a special summit in Varna on the Black Sea. The summit meeting should be March 26th.

European President Donald Tusk and Committee Chairman Jean-Claude Juncker have indicated in a letter to Erdogan that they want to talk about the mutual relationship, developments in Turkey and those in the region.

Relations between the EU and Turkey have deteriorated dramatically in recent years, partly as a result of the witch hunt that the Turkish judiciary has opened on possible supporters of a clergyman who is a political rival of Erdogan, Fethullah Gülen. According to the Turkish government, Gülen, based in the US, is behind the failed military coup in 2016.

On Monday, the Netherlands officially recalled the ambassador from Ankara. It was a symbolic step, because the diplomat, as from March last year, Turkey was not allowed due to mutual tension.