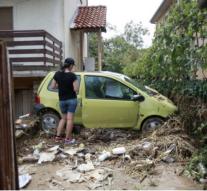 brussels - The European Union Tuesday sent a team to the flood-stricken Macedonia to identify what the damage is and what support is needed. A specialist in the field of humanitarian aid are traveling on Monday off to the capital Skopje.

The Balkan country has activated the so-called EU Civil Protection Mechanism, which provides worldwide assistance after disasters. EU Commissioner Christos Stylianides urged member states Monday to come up with an aid offer as soon as possible. The European Commission proposes satellite imagery available to assist the emergency services in the affected area.

Least 21 people died over the weekend killed by the floods caused by heavy rainfall. In and around Skopje is the state of emergency. The devastation is huge. Deputy Prime Minister Nikola Todorov said Sunday,, a catastrophe of unprecedented proportions. '