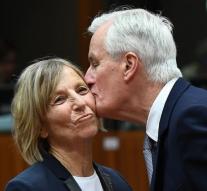 brussels - If it is in the European Union, discussions on the Brexit with the United Kingdom can begin. The EU ministers of European Affairs officially give their chief negotiator Michel Barnier a mandate on Monday to negotiate on their behalf. The Frenchman will receive a package of detailed guidelines.

The talks will start only next month, after the British elections of 8 June. 'We are very well prepared,' said Maltese deputy prime minister Louis Grech, who is in charge of the consultation in Brussels. According to German Minister Michael Roth, it becomes 'very difficult negotiations'.

Minister Bert Koenders hopes that the British will have realistic expectations. 'They must realize that if you are a member of a club and you want to leave, you have to settle the bill. '' The British will understand that the EU wants to defend the interests of its citizens. There is definitely a deal, he expects. 'That is in the interests of all of us. ''

The Member States will follow closely the progress of the negotiations and, if necessary, adjust them.