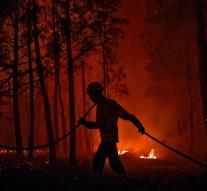 brussels - The European Union will make available 45 million euros to Portugal to recover the damage caused by forest fires.

The fire devastated in June to more than 40,000 hectares of forest. A total of 64 people died and more than 150 were injured. The fire raged in the region about 200 kilometers northeast of the capital Lisbon.

View the images of the fire here.

Up to 25 million euros is available for small and medium-sized companies to replace machines or other lost equipment.

Creţu stressed European solidarity with Portugal, which is plagued by a new series of forest fires. Partly with EU financial support, Spain has sent 160 firemen, 27 vehicles and four firecrackers to help fire the fire.