Home / World / 'EU freezes assets Myanmarezen thanks to the Netherlands' 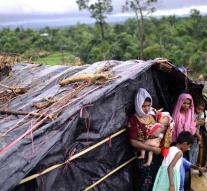 luxembourg - After the recent tightening of the arms embargo against Myanmar, the European Union is now also imposing sanctions against seven members of the (border) police because of their involvement in serious human rights violations in the Asian country. Their bank balances in the EU are frozen and they no longer receive visas for Europe.

The EU foreign ministers decided that Monday in Luxembourg. In February they had ordered the elaboration of measures because of the violence, murders and rapes by security forces, especially the state of Rakhine, from which more than 700,000 Rohingya Muslims fled.

Minister of Foreign Affairs Stef Blok is pleased with the decision. ' The Netherlands has always been committed to this in the EU. These sanctions should increase the pressure on Myanmar to put an end to human rights violations against the Rohingya population. '

The commander-in-chief of the army and other high-ranking soldiers have not been welcome in the EU since October. The military cooperation, including training, was discontinued last month. There is also an export ban on non-military goods that can be used to suppress the population.