Home / World / EU does not yet tighten climate targets 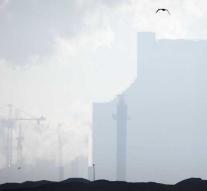 luxembourg - Despite the alarming report from the UN climate panel IPCC, the European Union is not tightening its objectives for the time being. The EU environment ministers were distributed during consultations in Luxembourg, but left open the possibility for tightening.

In order to meet the Paris climate targets, the EU has committed itself to reducing greenhouse gas emissions by at least 40 percent in 2030 compared to 1990. According to sources, fifteen of the 28 member states, including the Netherlands, wanted to raise that target, but unanimity required. To keep the global temperature rise below 1.5 degrees, at least 55 percent would be required.

The government ministers did adopt conclusions stating that there is an 'extreme urgency' to increase global efforts to prevent the dangerous effects of climate change. They are 'deeply concerned' about the conclusions of the climate panel, which warned Monday against disastrous consequences of a higher temperature rise.

In December a climate conference will be held in Katowice, Poland.