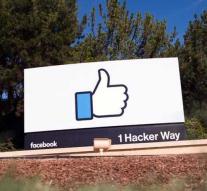 luxembourg - The Austrian activist Maximilian Schrems may challenge the Irish head office of Facebook as a consumer to the Austrian courts, but a mass claim on behalf of others is not permitted. That has been determined by the European Court of Justice.

According to Scherms, Facebook acts unlawfully by following users and trading information about them. It is supported by more than 25,000 Facebook users from around the world. By means of a mass claim, the Austrian wanted to claim a compensation of 500 euros per person from Facebook. That possibility is due to the Court's decision of the court.

Schrems had stepped to the Austrian court, but he asked the EU court for advice. The attorney general of the court had already advised in November to reject a mass claim.

On Twitter Schrems reacts that he 'can finally sue Facebook in Vienna. 'But he criticizes the EU court, which according to him' does not even try to analyze the arguments presented. '