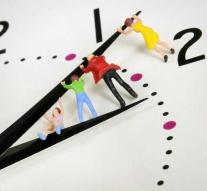 graz - Most EU countries, including the Netherlands, want to postpone the Brussels plan to put an end to the biannual resistance of the clock next year. A majority of Member States also believe that as many countries as possible should choose the same standard time as the current scheme disappears.

This became clear after a meeting of the EU transport ministers in Graz, Austria. There they debated for the first time the proposal of the European Commission that wants to set the clock one hour ahead by the end of March 2019. Each country has to decide for itself whether it will reset the clock to winter time in October or not.