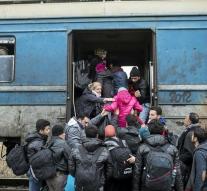 brussels - Chances are that a number of European countries in mid-March, the limits go slam as the flow of migrants it is not clearly decreased. 'Without stopping, there is no hope, then spring comes and then even more people will take the ferry to Greece. Only rely on Turkey that the country will probably stop the migration flow is no longer enough, 'said a diplomat in the margins of the EU summit in Brussels.

There was only a state of affairs taken by the Government with regard to the refugees, new measures are only expected at the next summit in March.

A number of European countries were angry with Austria, which announced to introduce a quota of migrants within allowed per day. The Austrian Prime Minister Werner Faymann, however, said not to retreat, 'after 100 000 refugees we can not tell the Austrians that it just goes on. '

Chancellor Merkel wants to stick to its plan to incorporate legally refugees from Turkey in the EU and the Turks to stop the flow and capture on home soil. But Ankara has with the bombings own problems and has started to bomb the Kurds, something that is not like the US and the EU, because the Kurds fighting IS. Because the attention of Ankara now fully focused on the PKK, the Turks seem better guarding the border with Greece and absorbing refugees in the region are put on hold to have put.

This will lessen the chance for the EU for the spring when the weather is better and more refugees are expected to conclude a real bdeal with the Turks. Incidentally, there is now 3 billion to set an amount that the Turks were still too low.

Now Turkey as a NATO country to interfere in the conflict in Syria, the chances are that there will also be live clashes with the Russians, in short, all the ingredients are now in place of the wave of migration to a prolonged migraine file.