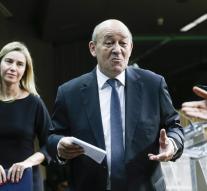 brussels - France gets help from the other 27 member states of the European Union. French President Francois Hollande had enlisted their support Monday following the attacks in Paris.

The request for help is based on an article in the Treaty of the European Union. This article 42. 7 was never used before. It obliges EU countries is a Member State that requires assistance with all means available to provide support, explained Mogherini. Many ministers offered to help, material or otherwise, she said.