Home / World / EU continues to hold down the Turkish boat 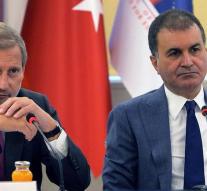 brussels - Further negotiations on Turkish accession to the EU are not possible in the current situation. 'We do not matter and we look forward. But we can not ignore the concerns of the Member States about Turkey since the failed coup a year ago, 'said EU Commissioner Johannes Hahn (Enlargement Negotiations) on Tuesday in Brussels.

There, Hahn and EU Foreign Minister Federica Mogherini spoke for hours with Turkish Ministers Mevlüt Çavusoglu (Foreign Affairs) and Ömer Çelik (European Affairs and Chief Negotiator). 'It is important that we have an open dialogue,' Mogherini said.

At a press conference, Çelik insisted that Turkey is not only a strategic partner for the region but that the 'backbone' of the European-Turkish relationship is Turkey's membership. He wants new negotiations to be taken.