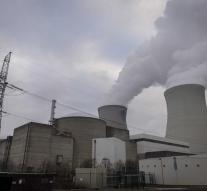 brussels - The EU countries have once again failed Tuesday in Brussels to agree on the reduction of national ceilings for emissions of harmful substances. Member States bickering for months over a Brussels proposal to the air quality in the EU to tackle the next decade.

State Secretary Sharon Dijksma (Environment), which leads the negotiations since January, is very keen on results because the subject is likely to be after July 1 of the EU agenda. But they failed to align the countries.

According to her spokesperson Netherlands does not give up and Dijksma works behind the scenes to find a solution.

Do you not see NPO boss


Since 2013, the European Commission substances such as sulfur dioxide (SO2), nitrogen oxides (NOx), methane (CH4), ammonia (NH3) and reduce particulate matter, 52 percent. According to the commission die each year 400 000 people die prematurely due to air pollution. Which is not only caused by cars and industry, but also pigs and cows. Agricultural Member States therefore want to go as far.