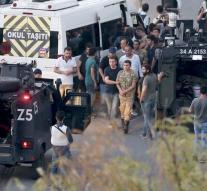 brussels - The EU condemns in strong terms the coup attempt in Turkey and underlines its full support for the legitimate institutions of the country, including the elected government and the Turkish Parliament.

'The EU deplores the high number of victims and its solidarity with the Turkish people. ''

This is contained in a statement Monday the 28 Member States have jointly brought out, after a meeting of foreign ministers in Brussels. 'The EU welcomes the Common Position of the political parties in support of democracy in Turkey '', is also in the statement.