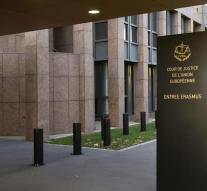 luxembourg - Parents from outside the EU with a child who has European citizenship can claim a stay in the European Union. That the other parent could take care of the child is important, but no reason to refuse a residence permit. That has determined the European Court of Justice on Wednesday.

The case is about a Venezuelan who visited a Dutchman with a tourist visa they had come to know on the internet. In 2009 they received a child of Dutch nationality. The mother has no contact with the Dutch father.

The Central Council of Appeal refused assistance and child support to the woman, but wondered if the mother could live in the EU. Then she might be entitled to it.

The council brought the case and a number of similar cases before the court in Luxembourg. He argues that the relationship between parent and child must be determined, so that in the case of a residence permit, the interests of the child are not prejudiced. It is up to the Dutch judge to judge that.