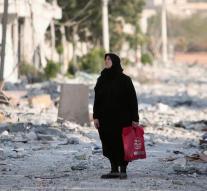 brussels - The warring parties in Syria should immediately observe a cease-fire to allow the besieged city of Aleppo humanitarian aid. That call did EU foreign policy chief Federica Mogherini Thursday. During the truce can wounded to be evacuated and restored electricity and water.

Aleppo is heavily fought since a month. The permanent bombings make aid transport impossible. Hundreds of thousands of people in the northern Syrian city left without electricity and running water and are deprived of international assistance.

Mogherini especially likes the Syrian regime with its,, excessive and disproportionate 'attacks responsible for the escalation of violence and the destruction of infrastructure. The United Nations called last week on a humanitarian truce.


The Netherlands welcomes the call for an immediate truce. Minister Bert Koenders (Foreign Affairs) had often insisted on a firmer,, 'EU position.,, It is good that the EU is united further step up the pressure on the regime ', he says in a comment.

Of food drops where he pleaded previously, however, there is still no. Minister Lilianne Ploumen (Development) calls it,, crucial '' that the Syrian regime provides access to Aleppo.,, So that the population, which for so long has to survive under appalling conditions, as quickly as possible get basic help. ''

The UN envoy to Syria broke Thursday a meeting in Geneva on humanitarian aid to Aleppo off because it can not reach. Staffan de Mistura reiterated his plea for a truce of 48 hours,, as a gesture of humanity from both sides. ' Russia was then a willingness to be a weekly cease-fire of 48 hours to allow aid convoys.


EU countries have long negotiated the statement, so let know sources in Brussels, partly due to differences over Russia. Mogherini repeated behalf of the EU that a political solution is the only way out.,, A political breakthrough is vital, 'he said.