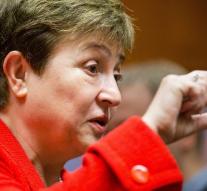 brussels - The European Union will rise next year more money for investment, jobs, the reception of asylum seekers and safety. Negotiators from the EU countries and the European Parliament on Thursday morning after long negotiations, agreement was reached on the budget.

Parliament welcomes also unlocked more money to combat youth unemployment (500 million) and the education program Erasmus +. For safety and care (and return) of migrants is 11 percent more than this year pulled out. Stimulate the economy and employment accounts for over 21 billion budget, about 12 percent more than in 2016.

The EU should spend more than 134 billion euros in 2017, a decrease of 6.5 percent, and concern for nearly 158 billion financial obligations. EU Commissioner Kristalina Georgieva (Budget) welcomed. It is expected that Member States and the Parliament in two weeks formally approve the agreement.