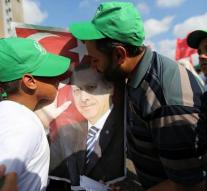 brussels - The EU calls for,, a rapid return to constitutional order in Turkey 'In a joint statement Saturday said EU foreign policy chief Frederica Mogherini:.,, Turkey is an important partner for the European Union, the EU fully supports the democratic. elected government, its institutions and the rule of law. '

EU'president 'Donald Tusk pointed Saturday after the EU-Asia summit in Ulaanbaatar, Mongolia, on,, the dramatic events that have shaken the world in recent days: the attack in Nice and the military coup in Turkey. Let the message of solidarity of our entire community in the light of terrorism and violence have an important message for the world. '