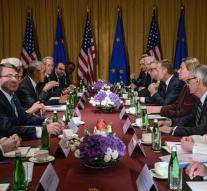 warsaw - The transatlantic relationship between the European Union and the United States Friday at the NATO summit in Warsaw even more underlined. EU leaders and US President Barack Obama stressed the need to work together to form a block against Russia.

The geopolitical consequences of brexitreferendum received much attention.,, Given the threats facing Europe, I expect that the UK continues to make a major and leading contribution to security in Europe and NATO operations, '' said Obama. Britons account for roughly a quarter of Europe's financial contribution to the military alliance.