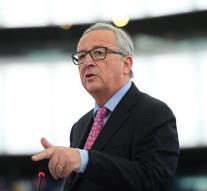 brussels - Leaders of the European Union express their support and compassion to the victims and relatives of the suicide bombing in Manchester. That definitely required 22 lives. Among the victims are also children.

President of the European Commission Jean-Claude Juncker heard the news about the 'brutal attack with great sadness and deep shock', he writes in a statement. 'Today we are grieving with the British people. Tomorrow we will fight them with you against those who want to destroy our way of life. '' The flags at the Brussels commissions building are halfway.

EU president Donald Tusk told Twitter that he is in Manchester with his heart. 'Our thoughts are with the victims. '' Many EU Commissioners responded shockingly. Among them, the British Julian King (Security), who expressed solidarity with the victims of the terrorist attack.

The thoughts of NATO chief Jens Stoltenberg go out to all those affected by the 'barbaric' attack. 'NATO is next to the United Kingdom in the fight against terrorism. ''