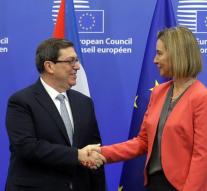 brussels - Cuba and the European Union will on Monday signed an agreement that should lead to cooperation and normalization of relations. According to EU foreign policy chief Frederica Mogherini get human rights, environment, fight against drugs and terrorism in it special attention.

The Cuban Foreign Minister Bruno Rodríguez Parrilla called the agreement a 'new phase' in relations between Europe and the Caribbean island. 'The dialogue on human rights takes place without taboos, in full respect and friendship,' said Mogherini after the signing ceremony in Brussels.

In March, the EU and Cuba arrived in Havana agreed to normalize ties and tighten, and pave the way for closer economic cooperation. Doing so will help to modernize the EU Cuba economically and socially. The agreement does not provide for a free trade area between the EU and Cub