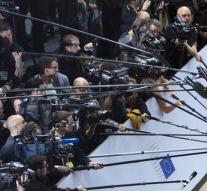 brussels - The 27 EU leaders unanimously agreed on a 'solid and honest political mandate' for the negotiations with the British on their departure from the European Union on Saturday. That EU-President Donald Tusk twittered shortly after Heads of State and Government had begun at their Brussels Summit.

According to European Commission President Jean-Claude Juncker, the 27 Heads of State and Government, including Prime Minister Mark Rutte, needed 'less than a quarter of a century' to agree on the assignment to EU negotiator Michel Barnier. The EU advocates a phased approach: first, complete the estate separation, including the account 'sufficient', then talk about the future relationship with the United Kingdom.

According to Chancellor Angela Merkel, the Guidelines for Barnier were 'well-prepared' and already negotiated at diplomatic level. Yet, the display of unanimity is 'unique,' as several leaders said.

In a statement, the 27 emphasize their desire to have the United Kingdom as a 'close partner' in the future. But 'a non-member of the union who does not have the same obligations as a Member State can not enjoy the same rights and benefits. '

Barnier and his team can now come up with concrete proposals for the first issues that will be addressed. That is the bill of divorce and the position of EU citizens living in Britain and the British living elsewhere in the EU. Clarity about the border between Ireland and (UK) Northern Ireland is also a priority.

The actual negotiations begin after the British parliamentary elections of 8 June.