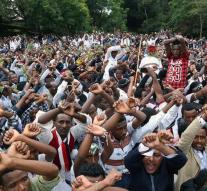 addis abeba - The Ethiopian Parliament approved Friday's lifting of the state of emergency, announced last year after large-scale riots had fallen hundreds of dead. The situation has now largely stabilized, according to the government.

Cause of unrest and protests were the expansion plans for the capital Addis Ababa. These would be especially at the expense of the area where most Oromo lives, due to land expropriations. They make up about one third of the population of the East African country. Ethiopia has around 100 million inhabitants.

Raging protesters last year attacked Dutch companies, allegedly because they were seen as an extension of the Ethiopian government. A crisis team was formed at the Dutch embassy.