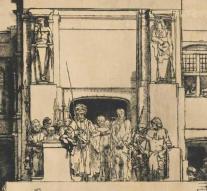 london - A famous etching by Rembrandt has changed ownership at the Christie's auction house in London for 3 million euros. It is a version of Ecce Homo. Then the Dutch master from the 17th century depicted the biblical story about Pontius Pilate, who lets the people of Jerusalem decide whether Jesus should be executed or spared.

Rembrandt made several versions of Ecce Homo and he made several prints of each variant. This copy is one of the eight known prints of the first version. The remaining seven are in the hands of large museums, such as the British Museum in London, the Louvre in Paris and The Metropolitan Museum of Art in New York.

The auction house did not announce the buyer who pays over £ 2.6 million for the work.

An oil paint panel by Gerard David brought even more to the same auction session of old masters: almost 5.5 million euros (4.8 million pounds) has a buyer left for The Holy Family. According to Christie's, that is a record amount for a work by the master painter from Oudewater, who caused a furore in Bruges in the late 15th and early 16th century.