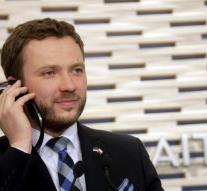 tallinn - Estonia fears Russia will take military exercises to permanently station troops in Belarus. That said Estonian minister Margus Tsahkna (Defense) prior to a meeting with officials from other EU countries.

Russia and Belarus intend to hold a large-scale exercise in September. Tsahkna said that Estonia and other NATO countries had information that would indicate that Moscow might plan to leave the military after the exercise in the Eastern European country.

The minister pointed to Russian plans to deploy 4000 wagons to transport military and material over the railroad to Belarus, possibly to set up a military outpost. 'For the Russian troops going to Belarus, it's a one-way trip,' Tsahkna said in Malta.