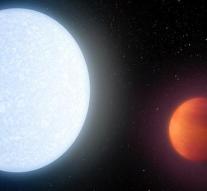 pasadena - 4300 degrees. It is so hot on the newly discovered planet KELT-9b. It is one of the hottest planets known so far. The planet is slightly cooler than the surface of the sun. The find is published this week in the important science magazine Nature.

The temperature is so high because the planet is very close to its star. There is no water, carbon dioxide or methane, because the star's UV radiation is too intense. Life is therefore completely impossible. Because of the heat the planet is evaporating. The KELT-9b probably has a 'tail' of its own material.

One year, the period the planet needs for a round around its star takes only one and a half days.