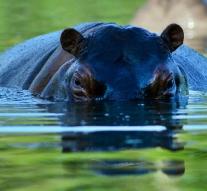 - Whoever thought that Colombia was freed from the extravagant drug lord Pablo Escobar, is wrong. Even twenty years after his death Colombians are still faced with the self-proclaimed king coke. Now in the form of its hippos, who survived Escobar.

The animals from the former zoo of the drug lord, reproduce so quickly forth, that there are already a few have escaped and run around in the Colombian jungle. Residents and visitors of Hacienda Napoles Puerto Trinfo, the former estate of Escobar and now a park, be warned with signs.

The hippos have no natural enemies in the area. 'It's a paradise for animals. They have much more freedom than they would in their natural habitat. They can therefore reproduce much faster, 'says an American ecologist. The group now consists of about 35 hippos animals: it is the largest herd outside Africa.

Escobar, whose cocaine empire earned him a fortune of about thirty million dollars, died in 1993. The drug lord was known for his extravagant lifestyle. On his farm he had alongside private zoo- with animals from around the world- a kart circuit, a collection of old cars, a bullring and a private airport.