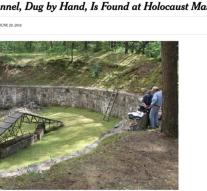 - Archaeologists have in a former German camp at Ponar in Lithuania discovered a forgotten escape tunnel. The tunnel was dug by hand by eighty Jews who tried to escape from the Nazis in the extermination.

The researchers found the 30-meter-long tunnel at a depth of between 1.5 and 2 meters using radar, The New York Times on Wednesday. Archaeologists have also found ways to find a place that contained the remains of about 7,000 people.


The eighty men involved in digging the tunnel were involved, were members of a group that had to resemble excavating and burning of murdered people when it was clear that the Germans were losing the war. Because they understood that they would themselves be slain last, they dug the tunnel to escape. Only eleven were able to get away and survive, because the guards discovered the escape in April 1944.