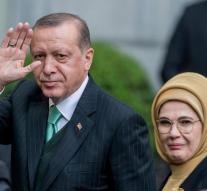 berlijn/krasnodar - Turkish President Erdogan has asked the German government to speak for his countrymen in the Federal Republic soon. Erdogan arrives at the G20 summit in Hamburg in July and wants to be trapped in Germany on a speech 'treat'.

The German Foreign Minister Sigmar Gabriel said this Thursday in Russia. He does not think it's a good idea. Gabriel feared that the German police had too much pressure with the G20 to also take security measures for Erdogan's speech. Gabriel also finds that Erdogan's speech 'does not fit in the political landscape. 'In the state of North Rhine-Westphalia, landlords reported that they were approached by Turkish authorities.