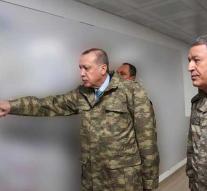 istanbul - The Turkish president Erdogan wants to extend his military operation along the Turkish-Syrian border if necessary to the east, all the way to the border with Iraq. He said on Friday that he wants to free the entire border from insurgents.

Turkey started Saturday in the Syrian region of Afrin (in the northwest) with an attack against the Kurdish YPG militia, supported by the United States. Ankara sees this as an extension of the forbidden PKK. About 25,000 fighters from the Free Syrian Army support the Turkish offensive.

At a meeting with regional leaders of his AK party, Erdogan said that Turkey will advance further to the east, and thus also to the city of Manbij. There are currently American soldiers who help the Kurds in their fight against Islamic State. This means that Turkish troops can end up in a confrontation with NATO ally the United States. Erdogan demanded Wednesday in a telephone conversation with his American colleague Trump that the Americans withdraw from Manbij.