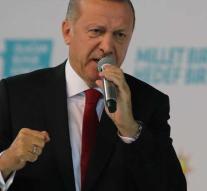 istanbul - The Turkish president Recep Tayyip Erdogan wants to expand the Turkish army's cross-border operations in Iraq and Syria. He will 'be the source of the threat \u0026 quot; to drain his land. Erdogan said that Saturday at the party conference of his Islamist conservative AK party in Ankara.

This announcement may aggravate the crisis with the US. In North Syria, American-backed fighters and Turkish troops face each other. Washington supports Kurdish groups there, which have achieved great success against Islamic State. They control an area of ​​hundreds of kilometers along the border.

Turkey, however, sees the units under the leadership of the YPG group at its border as a Syrian branch of the banned Kurdistan Workers' Party PKK. Twice it has already invaded the northwest of Syria with pro-Turkish rebels and captured Kurdish territory, as in the Afrin region, for example.

Ankara is also in conflict with the Kurds in Iraq. Turkish soldiers are active in northern Iraq, where the PKK withdraws. In September last year, the North Iraqi Kurds voted overwhelmingly in a referendum on independence from the rest of the country. Just like the Iraqi government in Baghdad, Turkey rejects an independent Kurdish state.