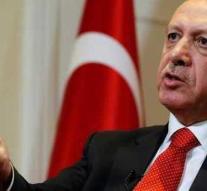 ankara - Turkish President Erdogan hopes for a brief offensive against Kurdish militias in northern Syria. 'We will, if god willing, complete this operation very quickly,' said the Turkish leader, who predicted that the YPG will flee.

The Turkish army has announced that it has bombed 45 targets in the Syrian Afrin region on Sunday. It would involve hiding and storage sites of the YPG militia, which would store ammunition and weapons there.

'Our aircraft have taken off and have been bombarded,' Erdogan said. 'Meanwhile, a ground operation has been set in motion. '