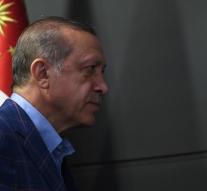 istanbul - Turkish President Erdogan wants to become a member of the government party AKP next Tuesday. That he announced on Saturday in Istanbul. It is expected that Erdogan will then be elected on the 21st of May at the special party day as chairman of the co-founded party.

Until recently, it was forbidden to be a member of a political party. However, since the referendum on the amendment of the constitution, won by the Erdogan camp, this is allowed again.