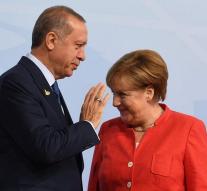 ankara - Turkish President Recep Tayip Erdogan called on the approximately 3 million voting Turks living in Germany not to vote on the CDU, the party of Chancellor Merkel and some other parties. The Germans will go to the polls on September 24 to choose a new Bond Day.

'I call all my countrymen in Germany to not vote for the CDU, SPD and the Greens, they are the enemies of Turkey. Support the parties who are not against Turkey, 'said Erdogan in a message he pronounced after Friday's prayer.

The Turkish president also accused Germany of 'violation of EU treaties'. This is because Merkel's earlier statements about freezing the negotiations on Turkish accession to the European Union and visa-free travel from Turks to EU countries.

Relations between the two countries have been choked after the distorted coup in Turkey last year. After the coup attempt, 50,000 Turks were arrested and 150,000 people were fired. The EU has repeatedly criticized the situation in Turkey. Erdogan does this as 'anti-Turkish sentiment in Germany'.