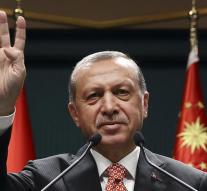 - The population of Turkey would like to hear back the death penalty and the members of the government belong to it. That President Recep Tayyip Erdogan Monday once again reiterated in a TV interview on German public broadcaster ARD, even if that decision immediately draw a line to get the desire of Ankara joining the European Union.

,, What do the Turkish people now? '' Erdogan asked rhetorically.,, They want to reintroduce the death penalty. We must listen to what the government says the people. We can not 'no, that does not interest us' say'.

Erdogan accused the EU also do not comply with the agreements regarding the refugee issue. There was turkey three billion promised for the reception of displaced persons, mostly Syrians, but there is only a token amount within one to two million. Also, the visa-free travel still not settled.,, We keep us the promises. ''