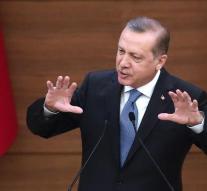 - Both the Turkish President Erdogan and the Turkish Prime Minister Davutoglu their party colleague, parliament chairman Ismail Kahraman, reprimanded after they had argued for a religious constitution.

,, The state must maintain an equal distance towards all religious beliefs and faith groups. That's secularism, 'said Erdogan during an official visit in the capital of Croatia, Zagreb.,, Kahraman has only spoken in a personal capacity '.

The Turkish Prime Minister Davutoglu told a meeting of his party AKP that secularism in the new constitution will remain.,, The secular and democratic character of Turkey is not in question. Secularism guarantees citizens freedom of religion and belief, and ensure that the state keeps the same distance towards all religions, 'said the Prime Minister.

Parliament President Kahraman had caused uproar when he suggested this week that Turkey is a Muslim country and therefore must have a religious constitution. He wanted the secular character of the republic, which was introduced by Mustafa Kemal Ataturk in 1923, deleted. The chairman of the constitutional committee Mustafa Sentop could also have been a reaction that in the draft of the new constitution, the secular nature of the Turkish Republic remains intact. The opposition parties CHP and MHP had reacted strongly against Kahraman.