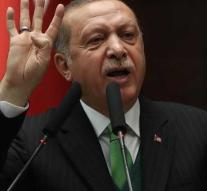 vatican city - Pope Francis will visit the Turkish president Erdogan for the first time this month. The Holy See announced that the Turkish leader will attend the Audience in Vatican City on February 5th.

Turkish media reports that the two leaders are expected to speak about Jerusalem. They would agree that there should not be any interference with the status of the city. US President Donald Trump previously decided to recognize Jerusalem as the capital of Israel. This led to a lot of commotion, among others among the Palestinians.

Erdogan received the pope in 2014 in Turkey. The head of the Roman Catholic Church was the first foreign head of state to visit the new presidential palace in Ankara. The relationship later eroded when Francis called the mass murder of Armenians in 1915 'the first genocide of the twentieth century'.