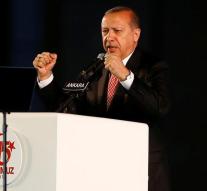 ankara - Turkish President Erdogan will visit some Arab states next week. He goes to Saudi Arabia, Kuwait and Qatar.

Turkey is an ally of Qatar. That country is under fire from five other Arab countries because of its alleged support for international terrorism. The five countries have broken the ties with Qatar and issued sanctions that are only withdrawn if Doha meets a list of conditions.

Erdogan, who is in the region on Sundays and Mondays, has repeatedly criticized this attitude of the five countries. With the permission of the Turkish parliament, he sent soldiers to Qatar.