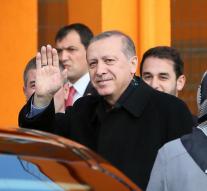 ankara - A referendum in Turkey on whether or not to continue the accession talks with the European Union. That suggestion made by the Turkish President Recep Tayyip Erdogan on Wednesday.

Erdogan seemed to be inspired by the British referendum on Thursday.,, We can stand up and the people submitting the question, just as the British do now, '' said the president, who showed annoyed about the attitude of Brussels during the negotiations.,, We would ask, 'Should we continue the negotiations with the EU and we must put an end?' If people want to continue, we are going through. ''

According to the president wants the EU to accept Turkey as a member not because it is a predominantly Muslim country.


The relationship between Ankara and Brussels is in dire straits. Brussels is very critical of the autocratic tendencies of the Turkish President and the undermining of fundamental rights as regards the EU. So Europe is very concerned about the persecution of critical journalists in Turkey.

One of the major points of contention between the EU and Turkey is currently the lifting of visa requirements for Turks. This is part of the refugee agreement between Brussels and Ankara. The EU demands that Turkey adjusts its anti-terror legislation, because it would be too vague and thus the door to abuse wide opens. Erdogan wants however none of it and has repeatedly threatened to blow up the refugee settlement.