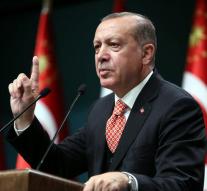 ankara - Turkish President Erdogan is expected to expand his power on Sunday when he is re-elected as party leader during the Congress of his AK party in Ankara. He had to resign in 2014 when he was elected president.

In the constitution at that time it was said that a president should not be connected to a party. Erdogan also forced his membership of the AK party, the organization he founded in 2001.

Due to the change of constitution, which the Turkish people expressed in the referendum in April, Erdogan could become a member of the party again and he could also become party leader.