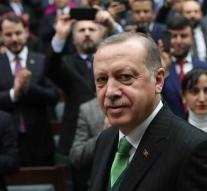 ankara - Turkish President Recep Tayyip Erdogan has said that the ground offensive against Syrian-Kurdish militias has begun in Syria. It is not known whether Turkish troops crossed the border. The president said nothing about Turkish state media.

The target of the Turks is the North Syrian region of Afrin and surroundings. That area is in the hands of Syrian-Kurdish militias who call themselves Public Protection Units (YPG). A senior Turkish government official said that rebels from the Free Syrian Army (FSA) help Turkey in the operation against the Syrian-Kurdish militias in Afrin.

The Syrian-Kurdish militias are allies of the US. Ankara sees the YPG as an extension of the terrorist PKK (Kurdistan Workers' Party) and wants to prevent an independent Kurdish state from the wars in Syria and Iraq.