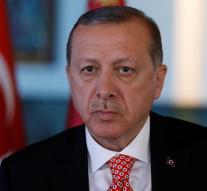 ankara - President Recep Tayyip Erdogan received 51.4 percent of the votes in the Turkish referendum on the constitutional amendment that will give him much more power. That has announced the high election council (YSK) on Thursday.

The official results do not differ from the outcome that Sunday's 16th of April was released as a forecast. Protests of opposition and observers due to dubious electoral practices, including counting of non-stamped ballot papers, were ignored.