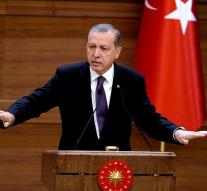 ankara - Russia's reaction after the downing of a Russian fighter near the Syrian border with Turkey, is " emotional" and " inappropriate". That said the Turkish president Tayyip Erdogan Thursday. He was reacting to include the charge of Russia that Turkey would buy oil and gas from the Islamic State and additional checks of Russia on food from Turkey.

" Is such an approach appropriate for politicians ", asked Erdogan in Ankara on ?. " First, politicians would have to sit down to talk about the mistakes that were made. And then see how we can do better on both sides. Instead, now made ​​these statements. That is not good. "

Erdogan finds the accusation of Russia on the sale of oil and gas not tidy. " ", ashamed he said about it. " It is clear that Turkey buys its oil and gas. Those who argue that we do when IS it must come with evidence. "