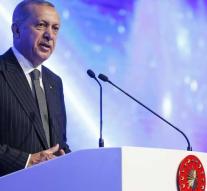 ankara - The Turkish president Erdogan will re-establish the state of emergency once as president. Erdogan said this in an interview on the TV in the run-up to the 24 June elections.

The intention is that the new elections will also give Turkey a different political system. Then the president is a powerful leader of the government. Earlier, the Turkish president was mainly a ceremonial figure and the prime minister led the government.