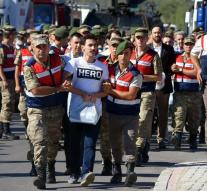 istanbul - Suspicions of the coup in Turkey must now wear brown suits in court. That has determined Turkish President Tayyip Erdogan. The prescription comes after a suspect of the coup trial before appeared in a t-shirt with the text 'hero'.

After the case, several Turks were picked up with a similar shirt on the street. They are accused of terrorist propaganda.

Erdogan said at the commemoration of the coup attempt that he wanted suspects to wear pantsuits. He named the apparel of terrorist defenders in Guantanamo Bay as an example.

Since the attempted coup in July last year, Turkey has arrested more than 50,000 people.