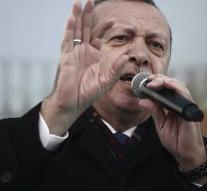 ankara - Turkey continues military operations in Syria. That said the Turkish president Erdogan, who put the 'terrorists \u0026 # x27; \u0026 # x27; want to expel from the areas around Manbij, Kamishli, Kobani and Ras al-Ayn. The Turkish leader did not rule out also to take action against Kurdish fighters in northern Iraq.

Turkey began an offensive against Kurdish militias in northwestern Syria earlier this year. They are seen by Ankara as extensions of the terrorist PKK movement. Turkish troops and their allies reached the city center of Afrin on Sunday, the most important place in the region of the same name.

The Turkish government has already indicated that it wants to expel the YPG militia from Manbij, where the Kurds cooperate with American special units. The Americans see the Kurdish fighters as important partners in Syria, partly because of the fight against IS.