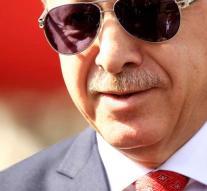 ankara - The Turkish president Erdogan has appointed himself chairman of the sovereign wealth fund of his country. The entire management had to clear the field and was replaced by a new board. According to the Turkish government Gazette, this includes the son-in-law of the president, Minister Berat Albayrak (Finance).

The Turkish government set up the organization two years ago, in the aftermath of the failed coup. The state fund has interests in, among others, Turkish Airlines, the state railways, Turk Telekom and banks.

Erdogan has held sway in Turkey since 2003, initially as prime minister and now as president. He has been more powerful than ever since this year. Turkey has switched to a presidential system, in which the President has far-reaching powers.